Taking the Good With the Bad (2017 Remaster) 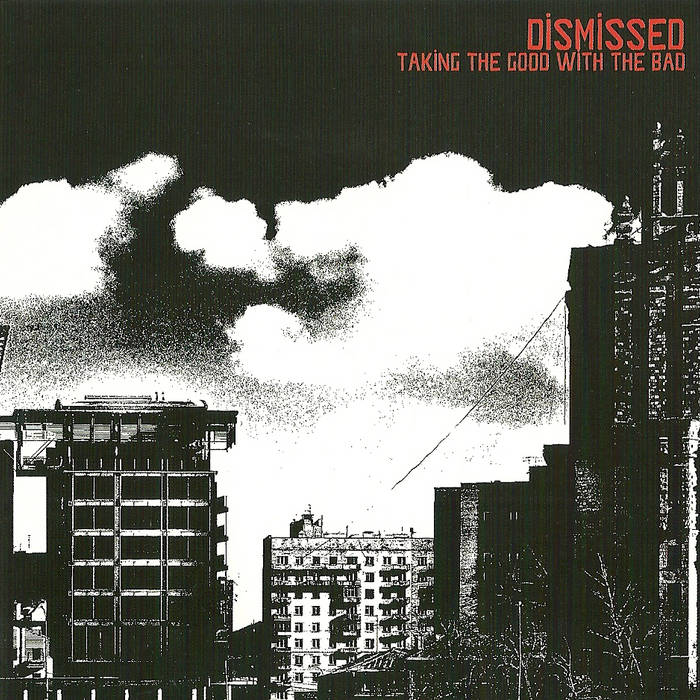 IVM001 Originally released in March of 2003 with different artwork.

Members of this band went on to play in Kings to You before calling it quits.

Enjoy a few tidbits below:

“Taking the Good With the Bad” bridges the divide between punk,emo,and hardcore songs by blending those styles together with a thick strain of melody. Wailing guitar solos, metal bridges, and the power of frontman Dave Arthur’s vocals brings an energetic freshness to the band Dismissed. The strain of emotion felt in the melodies and vocals show the true originality this young band possesses. The songs touch on topics of Desperation, Betrayal, Heartbreak, Suicide, and the hope that comes through faith. A fantastic first release from Dismissed. [Original One Sheet]

Some highlights from my experience working with Dismissed came in the form of a special one night show they played with Fall Out Boy in 2003 in Escondido. Believe it or not, the show was incredibly small and very few people were there for Fall Out Boy. This was just when Take it to Your Grave had released. I remember the Fall Out Boy guys walking around and someone in Dismissed handing them a copy of “Taking the Good With the Bad”.

Joel Piper (Confide/Olivia the band/Avery Pkwy) joined during his high school experience in late 2003 and played with them for about a year, recording the drum parts on their “Self Titled” final ep released in 2004. I have fond memories of going to the studio with the band to watch over their recording process for this final ep and being impressed with Joel’s talents. I have stayed in touch with Joel ever since.

In late 2004, the guys in Dismissed decided to change their name to “Kings to You” and go in a different direction musically from their past screamo sound. They released their debut independently in 2005 and I was proud of those guys, selling copies of it in my store, or what remained of it by that point.

By the time 2005 hit, Dave had done guest vocals on the As I Lay Dying album “Shadows are Security”, doing ALL of the singing parts on that album. I’m not joking, I’m dead serious. They didn’t have a “singer” at the time so they just used Dave in the studio.

*At one point I even tried getting Tooth & Nail to sign Dismissed, talking with Chad Johnson about it a few different times. Unfortunately, things didn’t work out and the 4 song Self Titled release was not enough to convince the Nail to sign them (plus they didn’t tour so that was a setback as well).

Taking the Good With the Bad was engineered by Erik and T.J.
Edited by Dave Swanson and Lenny, and mixed and mastered by Lenny
at Love Juice Studios in January 2003